It's time show you what's kept us busy in February. Say hello to alpha3! Aside from the many bug fixes, the focus is on improving cart functionality. We've also been busy stabilizing Inline Entity Form with dozens of commits and two new releases.

Reminder: Commerce 2.x alphas are NOT production ready. No upgrade path is provided between alphas. A full reinstall is needed each time.

The 1.x cart block was just a small embedded View. We researched over 20 eCommerce sites, and found that they all use a design similar to Commerce Kickstart v2, a cart icon showing the number of items in the cart. Optionally, clicking the cart icon shows a summary of the items inside. 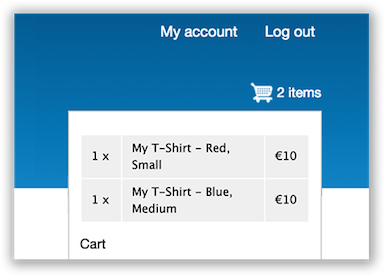 The summary shown on click is optional and can be disabled. It's powered by a View, making it easy to customize.

The cart view now shows the product rendered in the "Cart" view mode as the first column. Using rendered entities instead of individual Views fields stitched together is a best practice since Drupal 7, and we're reflecting that in our new defaults. This allows users to easily control field visibility (hide / show attributes, link to product) and themers to easily override the markup (e.g. to place the image in a different column).

The first two alphas shipped with a simple add to cart form, with a dropdown selector for the variation. Alpha3 ships with a completely rewritten add to cart form, supporting attributes and exposing line item fields. 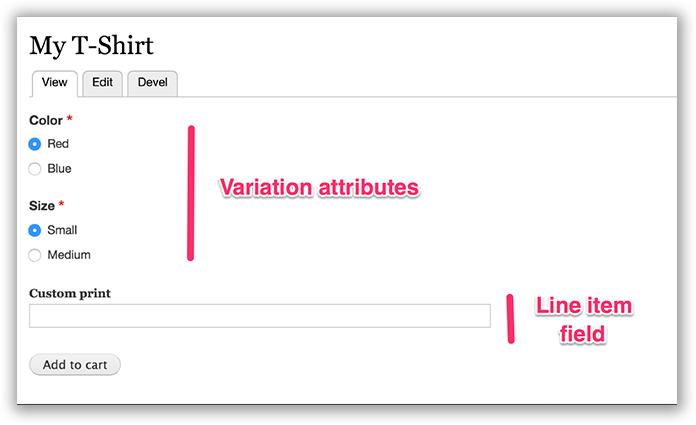 The 1.x add to cart form code was large, difficult to maintain and customize. We spent many iterations ensuring the new 2.x code is easy to understand and fully covered by tests. The new form is actually a line item creation form shown in a special form mode. The attribute selection logic lives in a widget for the line item's purchased_entity field. Exposing the quantity or a custom line item field is as easy as editing the form display: 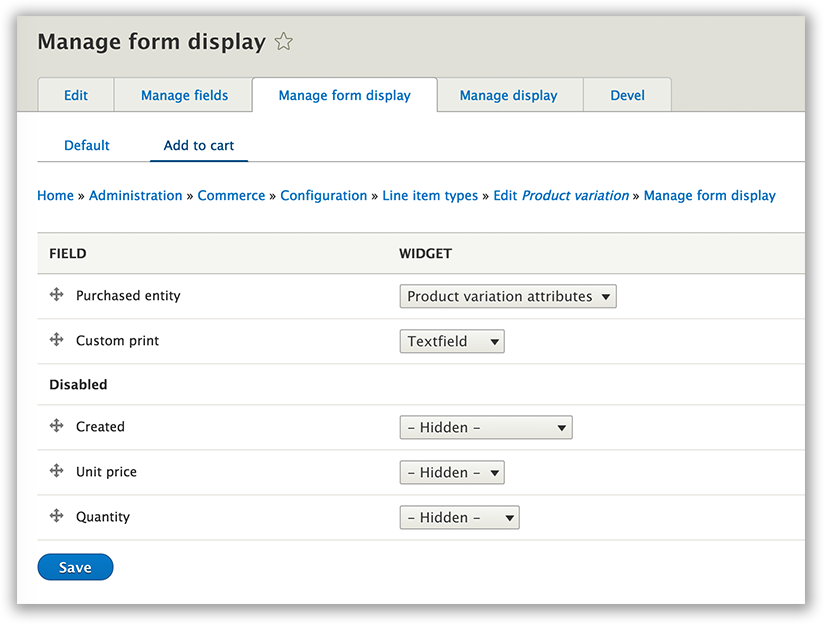 IEF plays a central role in the Drupal Commerce user experience, since it powers both the product and order add / edit forms. It is a dependency Commerce shares with Media, with Janez Urevc (slashrsm) being both the Media lead and IEF co-maintainer. At the end of January, IEF was in poor state, with many critical bugs and lacking test coverage. In February a team consisting of Janez, Ted Bowman (sponsored by Acquia), and myself spent over month of developer time on stabilizing the codebase.

With stability now approaching Drupal 7 levels, we can now focus on adding features important to Commerce, such as support for translating inline entities (such as product variation).

Special thanks to Rob Harings (harings_rob), who contributed many fixes for this alpha.

With work branching into many different directions, we had to remove checkout from the plans for this release. That's our biggest priority going forward. We'll also continue to polish the product, order, tax UIs.

Hi, great progress so far. Commerce + Drupal 8 + symfony is really exciting. What is the current roadmap for all those commerce guys contrib modules like kameleoon and nosto?

Keep up the good work!

I cannot see any checkout button on the cart page...!
Add to cart form is not configurable properly. It is showing administrator field for users also. Example editable price field and multiselect product properties, etc.

Hi, alpha3 does not contain any checkout functionality.
You can open a bug report in the issue queue for any issues you're having with the add to cart form.

Hey guys, great work on everything so far! Is there any estimated timeline for the beta and commerce checkout? I know you guys originally thought sometime late March or early April, so I was just wondering if you had a new expectation?

We've just released an alpha4 with checkout. The new beta target is somewhere in may, depending on how quickly payments land next week.

I wanted to address your question Sky Buzz, regarding 'editable price field' with the 'add to cart form' on product pages, for those who land here with similar issues. Please read my comment here: https://www.drupal.org/node/2702989#comment-12134795