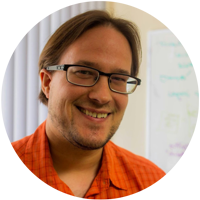 Hi! My name is Erik Peterson, aka torgosPizza, and I’m the “web guy” at RiffTrax.com, a web-based spinoff of the cult TV show Mystery Science Theater 3000. We’ve been making movies funny since 2006, and I help make that possible by maintaining the website and making sure our customers are able to get their downloads. I’m a self-taught developer with a BFA in Graphic Design, a proud Commerce contributor, and have been working with Drupal for over 8 years. Our site relies very heavily on Commerce, and so that’s where I spend the majority of my time in the issue queue!

It was pretty organic, actually. We’d been using Ubercart ever since it was in early Alpha on Drupal 5, after comparing various other open source cart systems. I was a contributor for Ubercart, helping to develop the File Downloads module since that was the main feature we needed, and we were among the first to put it through its paces on a live site. (Yes, we were running unstable Alpha code on production!)

I also helped develop modules such as UC Gift Certificates and UC Upsell. To say that Drupal was helping our business grow would be an understatement! I got to know Ryan Szrama through my work in Ubercart, so when he joined Commerce Guys and began the Commerce project, I was excited for its new abilities and promise of a more robust API written from the ground up to be more flexible.

RiffTrax was a bit of a late adopter, finally migrating from Ubercart on D6 to Commerce in October of 2014. In the year since, I’ve continued to use our own site as a “beta test in production,” fixing bugs as we find them and improving the user experience, then taking that knowledge back to the community in the form of patches, answers to support questions and recently, sprints with other contributors to help keep Commerce 1.x moving forward.

Since you’re running a digital product store, what makes Drupal Commerce so well suited for your business?

The ability to create new functionality and extend the Commerce suite with its various APIs - on top of the extensibility Drupal already offers - is the biggest asset to us as a small, digital-first company. We’re fans of taking risks, and with Drupal Commerce we have the ability to do so by quickly implementing whatever it is we can think of, such as new product types and discount offers.

One feature I’m particularly proud of creating is a custom “Upgrade to HD” discount for customers who already own a movie in Standard Definition. If an HD version of that title becomes available, they can buy it for the difference in price between the two! We plan on giving “Upgrade to HD” its own marketing email blast, because it was a feature request from our customers that has become very popular since bringing it online.

You’ve been involved in pushing through a number of initiatives in the Commerce ecosystem. You’ve handled quite a few bug fixes, and have done quite a bit of work on discounts as well. What keeps you motivated to work on these projects?

Thank you for noticing! I have a vested interest in the business that I’m a part of, and therefore I feel a personal responsibility to make sure our customers are happy. Because Commerce’s main function is to make money, obviously that’s the biggest motivating factor. When our site is making money, we as shop owners are making money; the better Commerce can be at doing its job, the more motivated I am to help keep it running smoothly. When I see that I have an opportunity to help the community at large from our experiences, I want to give back so others can learn from them.

When we first introduced a related products up-sell block on our Drupal 6 site, it doubled our average cart size. I had written UC Upsell because we needed that functionality first and foremost, but I also knew that others probably needed that same feature. Likewise, a lot of the contributions I have made lately tend to be out of necessity for our own site, but I have no doubt that they have gone on to help others facing similar needs. Discounts and Coupons in particular are tried-and-true ways of generating greater sales volume, so helping to fix bugs and keeping those modules working perfectly is a win for everyone.

So RiffTrax must be a hilarious project to work on. How do you get stuff done without getting sucked into the content?

You’re implying that doesn’t happen! It really is the best job in the world, and I’m extremely fortunate to be able to laugh every day at work (and not get in trouble for it). That being said, I try to just keep my focus by looking forward to the new products we have coming down the pipeline, and what new features we want to introduce to our fans.

One of my next tasks will involve getting Commerce Product Bundle integrated into the site - we’ve already put some time into fixing it up, but I’ll be working to further integrate it with Commerce License and then provide patches so that others may benefit. So while there is tons of laughing at my job, there’s always lots more to do, and I can’t wait to roll this new feature out.

Understanding it’ll be a while before you migrate, what are you most looking forward to in Drupal 8? What’s on your wish list for Drupal Commerce on Drupal 8?

I’ve been keeping up with the development of D8 since the beginning, and I’m thrilled to see it continue to mature and evolve. I even helped name the new Dynamic Page Cache, which I think will be a total game-changer for every Drupal site. I’m looking forward to the new plugins system, and how much more flexible Commerce sites will be thanks to it. But I’m super excited for Drupal to be more mobile-friendly out of the box, and its improved support for things such as RESTful services will make Drupal more powerful than ever before. While these changes are daunting as a developer who doesn’t have a ton of OOP experience, I’m eager to learn and challenge myself in order to reap the benefits that will come with this shift.

My wish list for Commerce in D8 revolves around improvements to the Checkout system. As Drupal and the world at large moves to a more decoupled web, I think the ability to further customize checkout - such as better Ajax and REST support, for example - would be a huge bonus for Commerce site owners like us who want to make the purchase process as low-friction as possible. Anyone can tell you that fewer clicks means higher conversion rates, and so I think special attention should be paid to that aspect.

What are you waiting for?! In all seriousness, I understand that not everyone has time to step away from their normal duties in order to contribute back. Time is money, after all! But, it is my firm belief that the time taken to give back is time well spent, and the returns are numerous.

For myself, because I already spend time at my job fixing bugs and other issues that pop up, putting that code and knowledge back out into the community is just a natural extension of my responsibilities. It also means the time I spent wasn’t wasted, and others can now benefit by saving time and money since I’ve already been down that road.

And I have to say, it’s an awesome feeling when a patch I’ve written or an issue I’ve worked on gets fixed: it means I don’t have to maintain a hacked version of a module on our site, and I’ve helped fix a problem for countless others!

Everyone is happy when their store’s ability to generate revenue is improved, and that’s something I’m sure a lot of business owners can get behind.

And, last question…What RiffTrax commentary should we fire up tonight?

That’s the toughest question of them all! It seems every week the riffers knock another one out of the park. If you like martial arts films, we just released No Retreat, No Surrender whose hero has a breakdancing sidekick and which stars Jean-Claude Van Damme as a Russian bad guy! But, if it’s pure 80s cheese you’re craving, look no further than Megaforce.

Mike, Kevin and Bill are as hilarious as ever - possibly even funnier than they were on MST3k - and I’m privileged and honored to be a small part of their legacy.

Thanks for sharing, Erik! It's been great getting to work with ya for so long and see how successful your site has been. I also credit you with my early craft beer exposure... that trip to The Great Northern in Denver was very instrumental. ; )